Celebrated in Brazil since at least the 17th century, the Festa Junina is the second largest celebration held by Brazilians, second only to Carnaval. According to historians, the festival originated in the cult of pagan gods, but it was influenced by Catholicism and today there is a strong association with Catholic saints, such as Santo Antônio, São João and São Pedro.

With the arrival of the Portuguese, the parties, which were already typical in Europe, also landed in Brazil and gradually mixed with elements from the interior of the country and from the backwoods traditions. Typical foods, dances and ornaments used in today’s parties are a combination of parts of African, European and indigenous culture.

Inserted in the context of the Festas Juninas, the Festa de São João takes place on the 23rd and 24th of June, to celebrate the birth of this Popular Saint, known as the Holy partyer.

São João was born on June 24th and was one of the closest saints to Jesus Christ, participating in his baptism on the banks of the River Jordan. So, St. John’s Day is June 24th.

In Brazil, the most famous São João night takes place in the northeast of the country, in the city of Campina Grande, in the state of Paraíba. This is considered the largest São João festival in the world.

However, other northeastern cities stand out: Caruaru, in Pernambuco; São Luís, in Maranhão; Mossoró, in Rio Grande do Norte; and Teresina, in Piauí.

In addition to the characteristic songs of Festa Junina, the forró has special prominence in this party. This is a very Brazilian rhythm and is widely heard in Festas Juninas and in all months of the year.

There are several categories of forró, the oldest and most classic have a guaranteed place in the Festas Juninas but there is also space for the most recent.

Feel the joy of this party and the Brazilian forró in this special playlist that I created for you to listen for free:

Typical foods of the Festa Junina

The festa junina has very peculiar characteristics when it comes to typical food. In all regions, the product used to prepare the party’s treats is basically the same: corn. Pipoca, canjica, pamonha, bolo de milho and curau are some of the delicacies served. There are also sweets made with peanuts, such as pé-de-moleque and paçoca.

There are also other foods with very peculiar names, like mané pelado, maria mole, maça do amor and cachorro-quente. In this universe, it also stands out the Quentão, a kind of tea made with ginger, cinnamon and pinga or cachaça and the Vinho quente, basically made with wine, fruits, cloves and cinnamon.

Decoration and characterization of the Festa Junina

The decoration of Festa Junina made with bandeirolas and balões, fogueira and fogos de artifício are items that characterize the environment. Everything is very colorful and straw and wood are also used to give a more rustic look to the party, referring to the rustic origin.

The clothes used involve plaid and patchwork prints with straw hats and braids.

There are also some games and practices to which the guests are subjected: pau-de-sebo, lavagem dos santos, correio elegante, casamento caipira and others, besides the famous quadrilha, a choreographed dance performed by couples with music and characteristic steps.

Check out the free playlist on Spotify with Brazilian songs from Festa Junina:

Oi, I’m Dani, Brazilian Portuguese teacher and I believe that learning Portuguese goes far beyond grammatical structures. In addition, learning a language gives us a new way of being and seeing the world. I help people who want to know Brazil to speak Portuguese so that they feel more secure, confident and prepared to live unique experiences traveling, living or working in the country.

16 useful phrases in Portuguese for Travel

My programs to speak Portuguese 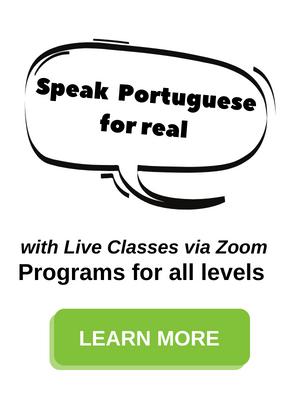 What you want to learn:

Do you feel lost? Everything we need to learn ANY

TAKE ME TO BRAZIL

The newsletter that sends you weekly content about Brazil and  to help you become fluent in Portuguese!